Canadian Angel of the Year Award 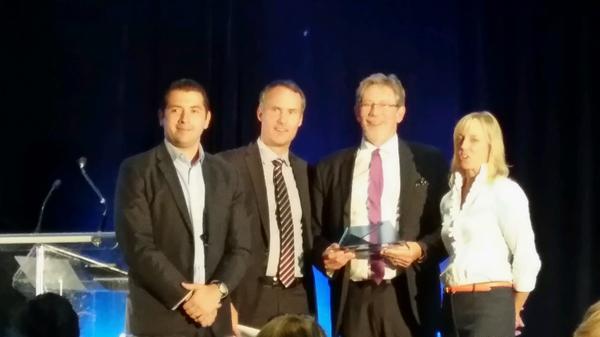 At the NACO Summit in Québec City, it was truly humbling to receive the Canadian Angel of the Year Award. I see this partly as a calling to be an ambassador to continue to help raise the Angel bar in Canada in the coming years. I wish to thank all those kind colleagues who, unbeknownst to me, wrote letters of nomination. Also, this is all based on the remarkable people at GTAN and in the Waterloo and Canadian ecosystem generally.

In response to the award, and recognizing the opportunity to build on current success, I shared the following observations and future challenges at the closing Keynote on Friday 3 October, 2014.

I hope that Yuri was aware of what he was unleashing by inviting me to share perspectives and future challenges of Angel investing in Canada! Not unlike a startup running on “fumes”, Canada’s angel sector reminds me of the quip from cartoonist Bill Hoest: “I just need enough money to tide me over until I need more”. I’ll start by looking back to help us paint a future directional context.

As Angel investors, we’ve watched a powerful people-driven engine, coming from nowhere, to become a key enabler of Canada’s future prosperity. As Angels, we fuel innovation companies with our capital and mentorship, ultimately creating some of the highest value jobs for 21st century Canada. What’s not to like about that?

Let’s turn the clock back about 5 years. In 2009, the global economy endured the infamous credit crunch, perhaps the worst economic correction since the Great Depression. I observed this to be the final nail in the coffin for a large number of Canadian venture capital firms, for years struggling to generate viable returns. The seeming extinction of venture capital A-rounds and the bleak landscape for young, emerging companies, compelled me, as a seasoned tech investor, to get involved with the founders at Golden Triangle AngelNet (GTAN) in Waterloo-Guelph-Wellington-Stratford area. In a pattern surely repeated across Canada, Angel Groups from a slow start quietly and persistently worked to fill the funding gap through a labour-intensive “syndication” of Angel capital, with other groups and with government co-investment. In Ontario, this meant repurposing MaRS IAF from its origins as a VC on-ramp to co-investment in Angel rounds, lobbying that ultimately led to the Feddev “Investing in Business Innovation” (IBI) program, and BDC convertible notes.

A typical syndication for a top tier investee company might entail half a million dollars of Angel money being spun into $1.5 million or more. I used to describe this approach as providing “half the money of a VC A round for 10 times the effort”. At the time, I imagined this to be a strategy for a short term “bridge” of Canada’s innovation ecosystem to a more sustainable future. How did this market correction turn out for Canadian Angels?

NACO stats show a remarkable growth in total Angel investment. Between 2012 and 2013 alone, Canadian Angel group direct investments grew a stellar 120% from $40 million to $89 million. Of course, this doesn’t capture the aforementioned co-investment leverage that Angel investors attract nor does it cover investments outside of NACO members. All of us rightfully deserve to be proud of such collective impact.

But is it enough? Both from my own international investing and available statistics, it would appear that Canada’s Angel ecosystem is ahead of Europe on the maturity curve. I would estimate Canada has a 3-5 year head start on Europe. On the other hand, our American friends are definitely well ahead in maturity, deal dollars and information gathering. Angel Capital Association (ACA) data shows almost $25 billion of total US angel investment in 2013. To be at this level, on a per capita GDP basis, Canada would need about $2.8 billion of annual Angel investment. Even counting all the leverage, Canadian angel investment needs to grow 5 to 10 times over the coming years just to achieve parity with the US.

In Waterloo, home of Perimeter Institute, we tend to love Quantum Mechanics metaphors. Thus, propelling today’s critical mass through a quantum leap is a mission all of us need to work on collectively and individually, whether as angels, angel groups, NACO, governments, venture capitalists, sponsors, in fact, each and every ecosystem participant.

So, I will conclude by identifying just five of the gaps that we collectively need to fill:

With these key points in mind, and assuming the right environment, I have no doubt that greater innovation in business models will fuel growth of a larger and more sustainable Canadian angel landscape. All of us can play our part. To dial up our game, will be an aggressive, yet I believe achievable challenge. And, we need even better measurement so we can regularly monitor, and report back to ecosystem participants, our progress.

The road forward isn’t just about traditional business. Because Angel investors’ motivations uniquely straddle the ever-blurring boundary between “passion capital” and Wall Street-style finance, Angel investing will increasingly be a great exemplar of Social Innovation. To me, the culture of collegiality and sharing resembles my experiences in nation-building around charitable foundations.

The last five years have witnessed an unprecedented expansion of Canadian Angel investing and we are poised for even more remarkable growth in the next five. In the words of the incomparable Alan Turing,

“We can only see a short distance ahead, but we can see plenty there that needs to be done”.